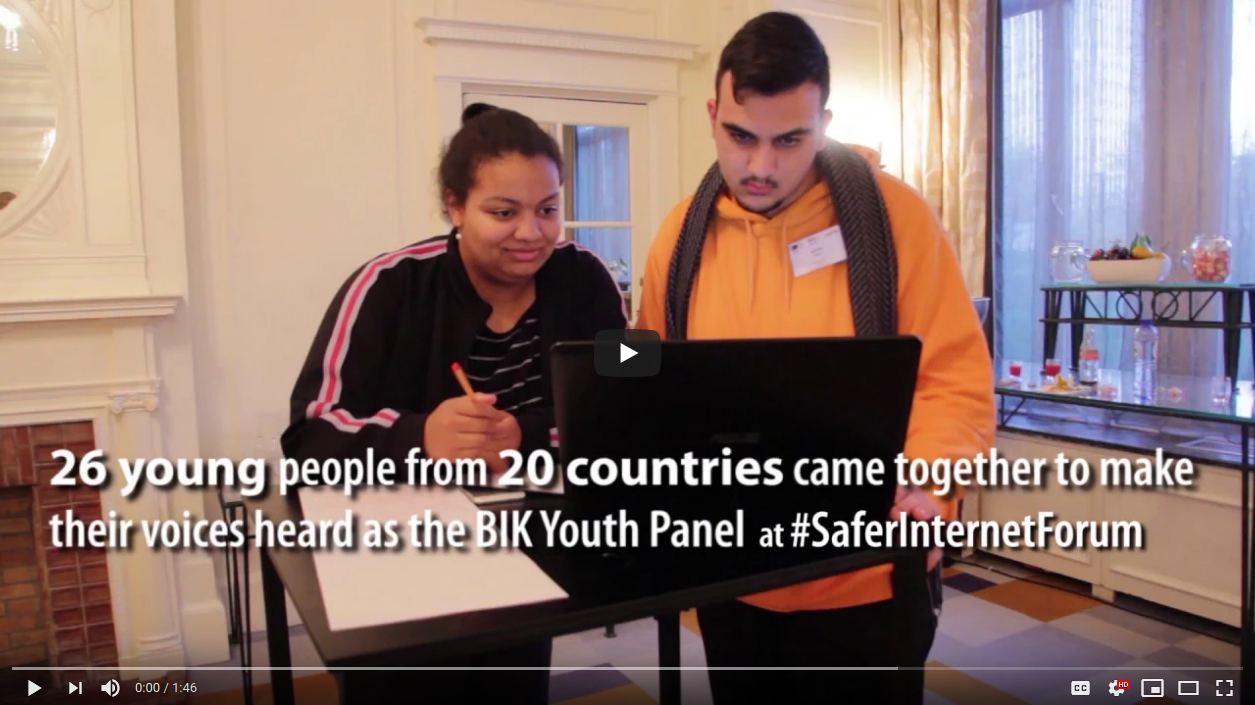 In November I was in Brussels with Barbara Buchegger facilitating the BIK Youth Panel participation at the Safer Internet Forum. This report is from the Better Internet For Kids site:

On Wednesday, 21 and Thursday, 21 November 2019, 26 youth panellists from 20 European countries came together in Brussels, Belgium to attend the Safer Internet Forum (SIF) 2019 and the preceding BIK Youth Panel.

Throughout the months of October and November 2019, the youth panellists gathered in six online meetings as part of the BIK Youth Programme, to discuss their ideas for their “Flip the consultation: a dialogue led by youth” during the SIF. During this period, they launched an Instagram campaign (BIK.YouthforYouth) and planned the structure of their flipped consultation, which comprised a short theatrical performance, followed by table discussions and a presentation of their survey and campaign.

On Wednesday, 20 November 2019, under the supervision of privacy expert Chris Pinchen, Austrian Safer Internet Centre (SIC) representative Barbara Buchegger and members of the BIK Youth Coordination Team, the youth panellists started working on a detailed plan for their session. After some energiser activities, they moved on to a problem-solving activity in which they took the roles of helpline representatives and callers to simulate typical helpline calls. Following this activity, they summarised the cases and discussed possible solutions to issues pertaining to online violence.

In the remainder of the morning session, the BIK Youth panellists discussed the survey on online violence, which they have conducted in in the preparatory period. They talked about how they would evaluate the results of their survey and present their findings during their session at SIF. An initial idea was to pick a few striking responses to present in the plenary session.

The youth panellists then started sharing various ideas on the dramatic entrance and sketch that would open their SIF session. At this stage, they also started thinking about the general structure of the session, and they discussed the following points:

At the end of the morning session, the group also discussed the roles each youth panelist would take, such as writing the play, acting, facilitating the session, live-tweeting, creating content for the table discussions, and presenting the Instagram account, among others.

The afternoon session started with Barbara Buchegger providing the panellists with an overview of the timing of their youth-led session at SIF. Following the discussions on how the SIF session would unfold and how each planned activity would fit in, the group started to determine the topics for table discussions. During the brainstorming, the group came up with a list of possible topics, some of which included:

In the final stages of the preparations, the panellists broke into smaller groups to rehearse their acts, and prepare their presentations and the posters to be used during the SIF session. Throughout the following day, youth panellists participated actively in various sessions at SIF where they also led their plenary session.

There was great interest in the youth-led “flip the consultation” session from participants of the Forum, and the congratulations and praise received afterwards reflected the success of the session.

For more information on the BIK Youth Panel and for an overview of the BIK Youth Ambassadors, please visit the Better Internet for Kids (BIK) Youth portal.